Photo Gallery: The Treasures of the Golden Pharaoh 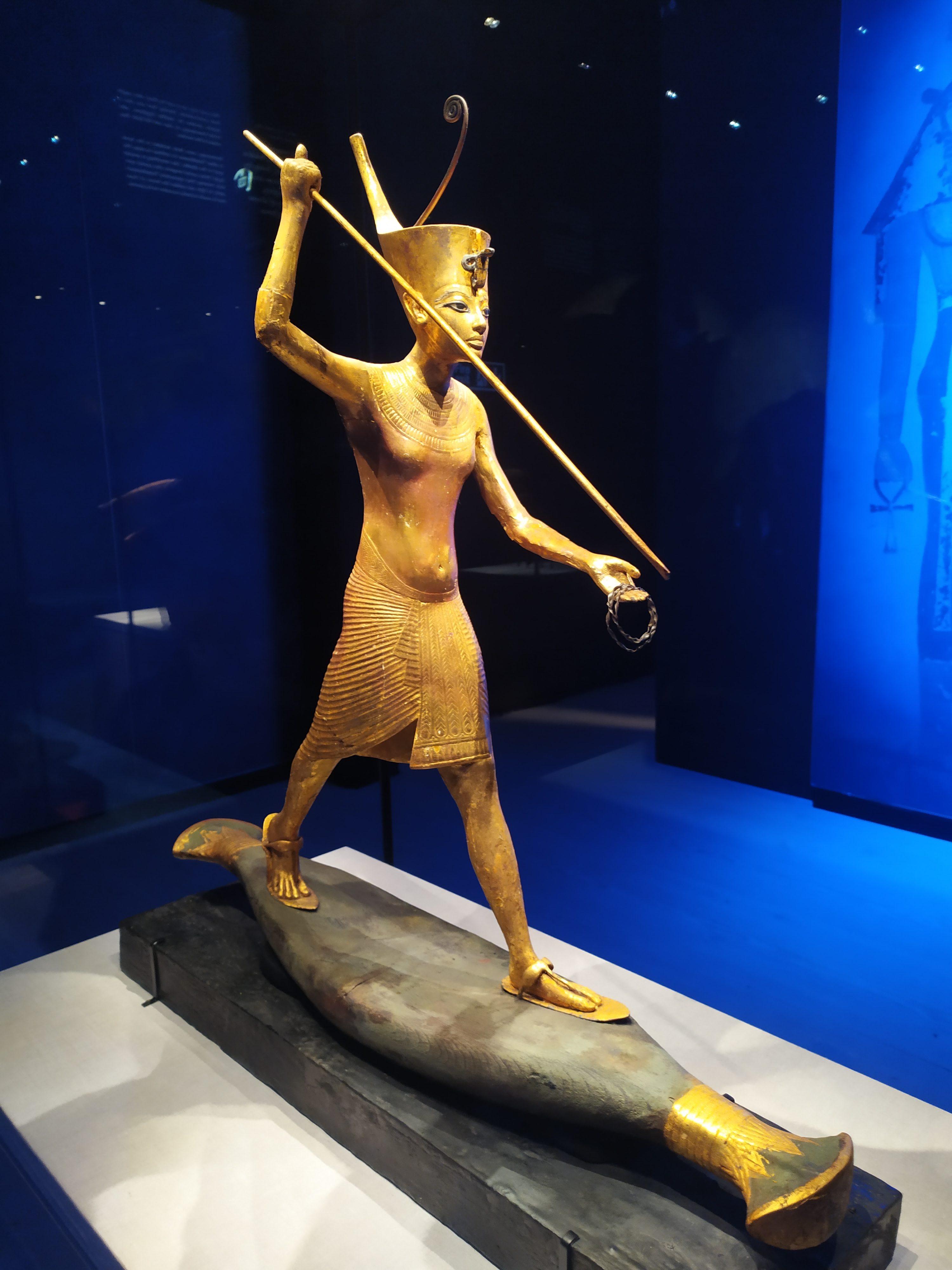 Despite being dead for over 3,000 years, King Tutankhamun has been busy. The ancient Egyptian ruler has just arrived at London’s Saatchi Gallery as part of his latest world tour. 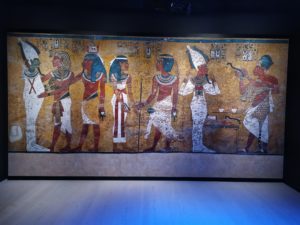 The global tour is marking a century of discovery by the British archaeologist Howard Carter and financier Lord Carnarvon in 1922. The discovery remains the only Ancient Egyptian royal tomb ever found intact. King Tut’s previous visits to London, in 1972 and then 2007.

Tutankhamun: Treasures of the Golden Pharaoh showcases 150 objects from the King’s tomb, 60 of which are travelling out of Egypt for the first time. These pieces shed light on the royal life of the pharaohs, their glorification of death, and their ceremonial passage to the afterlife.

Preparation for the Afterlife:

he afterlife was just like Egypt, only even more perfect. To get there, the deceased first had to pass through the 12 gates of Netherworld, a place swirling with danger and evil forces that could be controlled only by magic. To enter, the deceased had to know and speak the names of the guardians of the gates.

Ancient Egyptians lived in the Nile valley, a narrow strip of lush and fertile land. Thanks to the river’s annual floods, food and wine were plentiful. The surrounding desert contained an abundance of gold and other precious metals and stones.

Priests prepared Tutankhamun for his passage through the Netherworld by packing his tomb with everything he would need on the journey and, later, in the afterlife. 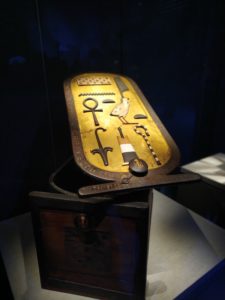 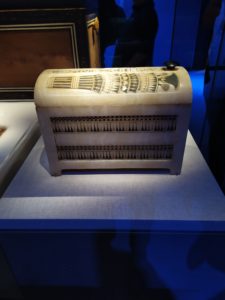 Two Bundles of human hair found in the box. possibly belonging to Tutankhamun and his wife Ankhesenamun. Along with a small ivory pomegranate found with them, these may represent the couple’s marriage contract. 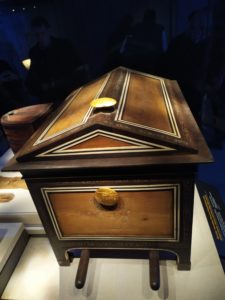 This box shows Tutankhamun making an offering to Osiris (Lord of the Underworld). It contained objects to be used for an Afterlife ritual ceremony.

Packing for the afterlife:

Tutankhamun lived a luxurious life surrounded by exquisite objects. The content of his tomb were a link to the world he was leaving and everything he might need in the afterlife.

More than 50 boxes and chests made of papyrus pith, wood, calcite, ivory and obsidian were filled with beautiful items: elegant clothes, linens, food, oils, protective amulets, jewellery, and even games. 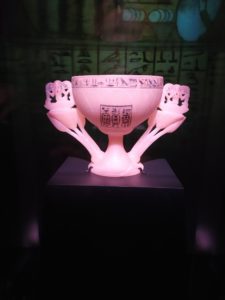 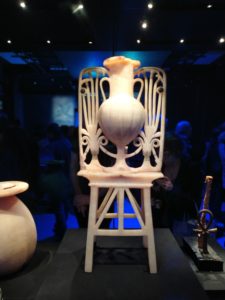 Vase with papyrus and lotus flower 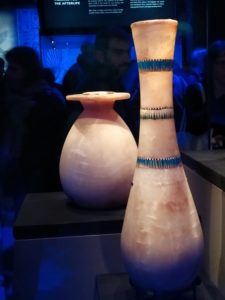 A brownish residue from a perfume oil was found inside this vase. Oil used in rituals were highly valuable. 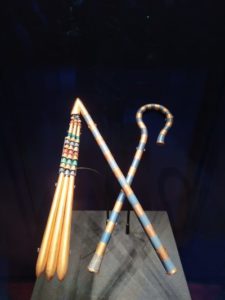 Both crock and flail made of copper, gold, lead, glass, wood. 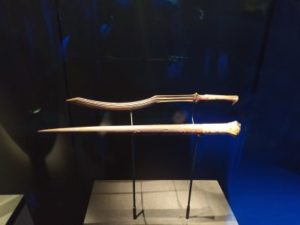 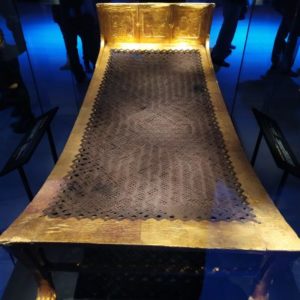 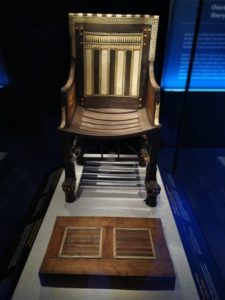 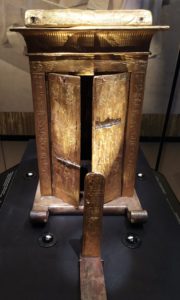 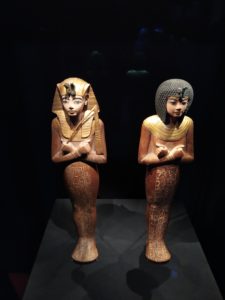 King Tut married Ankhesenamun, his half-sister. They shared a father, and her mother is the renowned beautiful Queen Nefertiti. 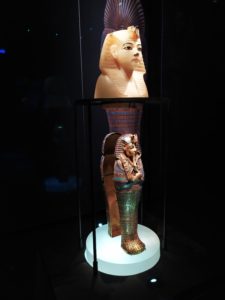 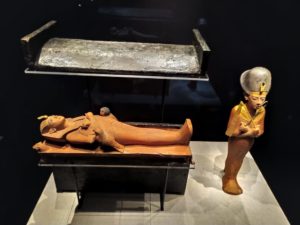 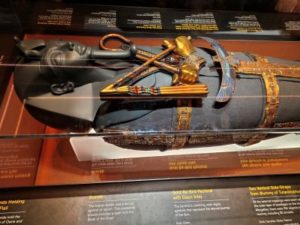 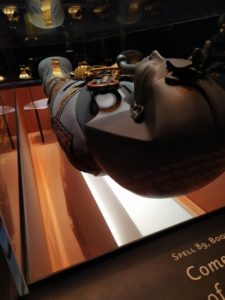 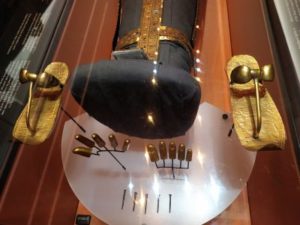 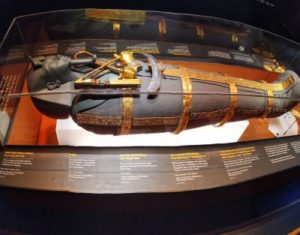 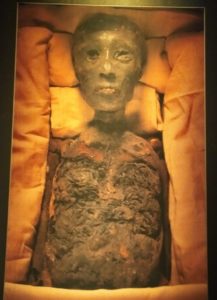 The Mummy is his tomb in Luxor, Egypt 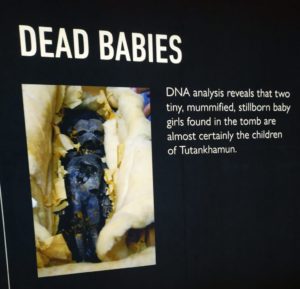 The king had children from his half-sister wife, as DNA suggests stillborn mumfied babies in his tomb. 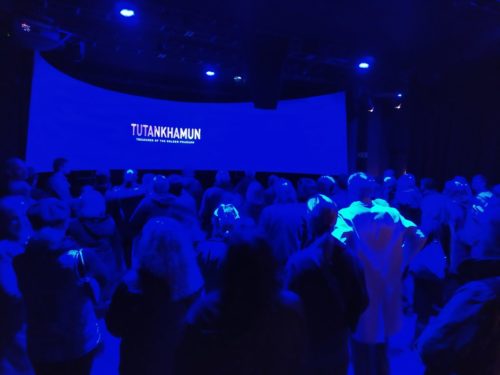 Media outlets have pointed out that the exhibition’s tickets are overpriced, ranging between £18 for children, and £25 to £36 for adults. Weekend admission could cost one family around £130.This however has not deterred visitors.

“ I found the exhibition absolutely fascinating, particularly impressive to see the workmanship that was available on those times. And it is a start to get an idea about different belief systems”  Colin 67, British engineer.

‘’The most thing I liked, the way it was showed him as more of a human story.. not just showing artefacts” Anna, Brazilian tourist.

Tut’s previous visits to London in 1972 and then 2007, drew record crowds of well over one million visitors. The current touring exhibition launched in Los Angeles, before heading to Paris where it became France’s most-visited museum exhibition of all time, drawing 1.4 million visitors. It will continue to travel to another seven cities around the world before being permanently housed at The Grand Egyptian Museum. The exhibition runs from 2 November 2019 to 3 May 2020 at Saatchi Gallery.