Asia-Pacific trade deal: New battlefield for China and the US?

Raven News > News > Asia-Pacific trade deal: New battlefield for China and the US?

The signing of the trade agreement Region Comprehensive Economic Partnership (RCEP) was seen as a weakening of US influence. A new battlefield in the power struggle is on stage now. 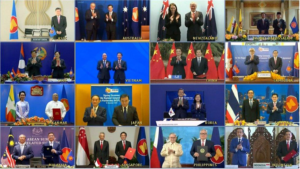 It has been eight years since the first round of RCEP negotiations were held on 9—13 May 2013 in Brunei. Due to the coronavirus pandemic this year, all the members hope the pact will help to spur the recovery of member economies.

The Prime Minister of New Zealand, Jacinda Ardern said: “Securing free trade agreements like RCEP is an important part of New Zealand’s Trade Recovery Strategy, helping to put New Zealand in the best possible position to recover from the economic impacts of COVID-19 and seize new opportunities for exports and investment.”

The whole world focused on the Asia-Pacific region and witnessed the signing of the RCEP Agreement on November 15. Collaboration at successive levels, fifteen members makeup almost a third of the world’s population and account for 29 per cent of global gross domestic product, making it the biggest trade bloc in history.

RCEP will endeavour to eliminate almost 90 per cent of the tariffs on imports between its members within twenty years of coming into force and establish common rules for e-commerce, trade, and intellectual property.

Chinese Premier Li Keqiang said, “Under the current global circumstances, the fact that the RCEP has been signed after eight years of negotiations brings a ray of light and hope amid the clouds,”.

However, President Donald Trump thought this deal would accelerate U.S. inequality, and withdrew the U.S. signature from TPP in January 2017.

Because the trade agreement never came into force, the remaining 11 countries signed the Comprehensive and Progressive Agreement for Trans-Pacific Partnership (CPTPP) on 8 March 2018.

The CPTPP consists mostly of the TPP provisions, except 22 provisions the US favoured that other countries opposed.

The United Kingdom might be a potential future member of CPTPP. On 9 September 2020, the UK government announced it was taking a major step in the process of joining CPTPP.

Since 2009 trade between the UK and CPTPP countries has grown on average by six per cent, so joining the agreement could reduce costs for businesses and create new economic opportunities for UK exporters.

The day before RCEP was signed (Nov 14), President Donald Trump skipped a virtual summit with ASEAN.

The national security adviser O’Brien said in remarks at the opening ceremony, “At this time of global crisis, the U.S.-ASEAN strategic partnership has become even more important as we work together to combat the coronavirus.”

Despite Trump’s absence, the White House said in a statement that ASEAN remains central to his vision. 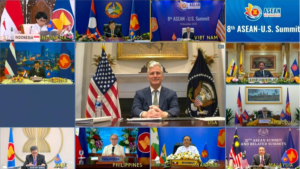 Jennifer Hillman, a senior fellow for trade and international political economy at the Council on Foreign Relations, said “While the United States is currently focused on domestic concerns, including the need to fight the pandemic and rebuild its economy and infrastructure, I’m not sure the rest of the world is going to wait until America gets its house in order,” she added “I think there are going to have to be some responsive actions to what China is doing.”

As Christian Le Miere, a foreign policy adviser, points out: the challenge is “the Asia-Pacific region has shown no need for US leadership or even involvement.”

Facing all these challenges, U.S. President-elect Joe Biden said that “We need to be aligned with the other democracies, another 25 per cent or more so that we can set the rules of the road.”

The alternative would be to let “China and others dictate outcomes because they are the only game in town,” he said on 16 November, after 15 Asia-Pacific countries signed the trade agreement.

“I promise you I have a pretty thorough plan,” said President Biden, “and I will be prepared to announce that to you on Jan. 21.”

Both sides take time to test possible outcomes. The U.S., which is not a party to either RCEP or TPP, may announce its next step in 2021.