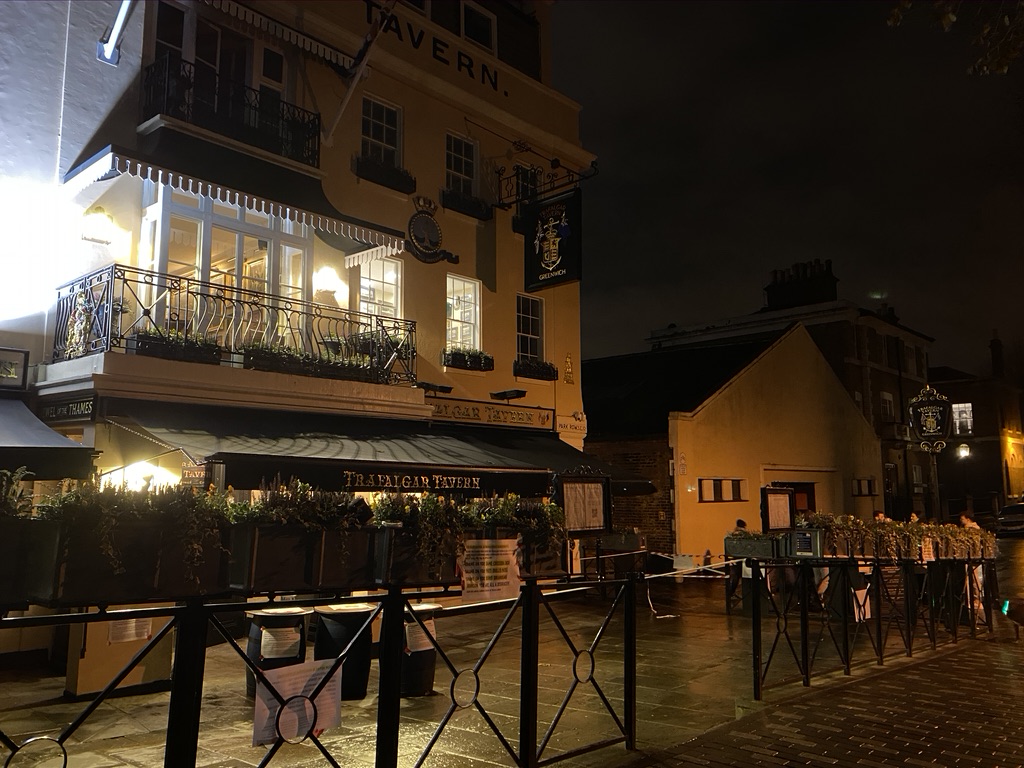 The Trafalgar Tavern pub on the Thames in Greenwich voiced their outrage after being fined £1000 by the Metropolitan Police over a breach of the lockdown restrictions .

The tavern shut their doors and tape was wrapped around the terrace on November 21.

The Trafalgar Tavern has been a landmark on the riverside since 1837 when Queen Victoria succeeded to the throne. Writer Charles Dickens chose this pub as the setting for the wedding breakfast in Our Mutual Friend, his final novel.

The historic Trafalgar Tavern (1837) in South London, where Dickens got drunk #lockdowncycling pic.twitter.com/huJuiDYX0z

Would-be customers were greeted that night with a poster detailing the fine.

“The Met Police have today issued the Trafalgar Tavern a £1,000 fine for lawfully abiding citizens consuming lawfully purchased food and drink in this vicinity. This fine will be appealed,” the poster said.

The venue resumed offering food and drink takeaways the next day and vibrancy returned to the site.

Another poster read the government “have required us to deny you and your freedom to consume this lawfully attended food and drink in this area.”

Although it is not known yet what exactly prompted the fine, some social media commentators suggested that “huge, uncontrolled crowds” that were reportedly allowed to drink “takeaway” booze in the pub’s front area were to blame.

Ongoing restrictions and curfews caused by COVID-19 have devastated the UK hospitality sector.

Emma McClarkin, chief executive of the British Beer and Pub Association, expressed  her deep concern to the Evening Standard. She warned that around 1,000 pubs in London were at risk of permanent closure after the latest lockdown without support from the Government.

Pubs in England will face new rules under the tier system from December 2. London pubs in Tier 2 can only open if they serve substantial meals. Alcohol can be served with that meal.

They demanded that the government should publish the evidence justifying the restrictions on the sector immediately.

Customers collecting takeaways at the Trafalgar Tavern gave their sympathy to the pub.

Shaun Taylor, 64, drinking beer with his friend on the Thames, said to Raven: “I’m not a regular, so didn’t know about the fine. But I understand the pub’s difficulty.” He added: “Taking away like this is an interesting new approach. Now, we are enjoying beer keeping social distance outside. There’s nothing to be punished [for].”

Robert McDonald, 35, sipping his latte, said he had heard about the pub’s trouble from his friend who had witnessed the police coming. He described the tavern as an important historical heritage for locals.

“Lockdown has hit the hospitality industry so hard. Pubs should do anything they can to survive. Serving takeaway drinks and food is a sort of entrepreneurship,” he said.

The Trafalgar Tavern will reopen with a new menu from December 2, according to their Instagram.