Is the art world ready to cut its ties with big oil?

Raven News > Uncategorized > Is the art world ready to cut its ties with big oil? 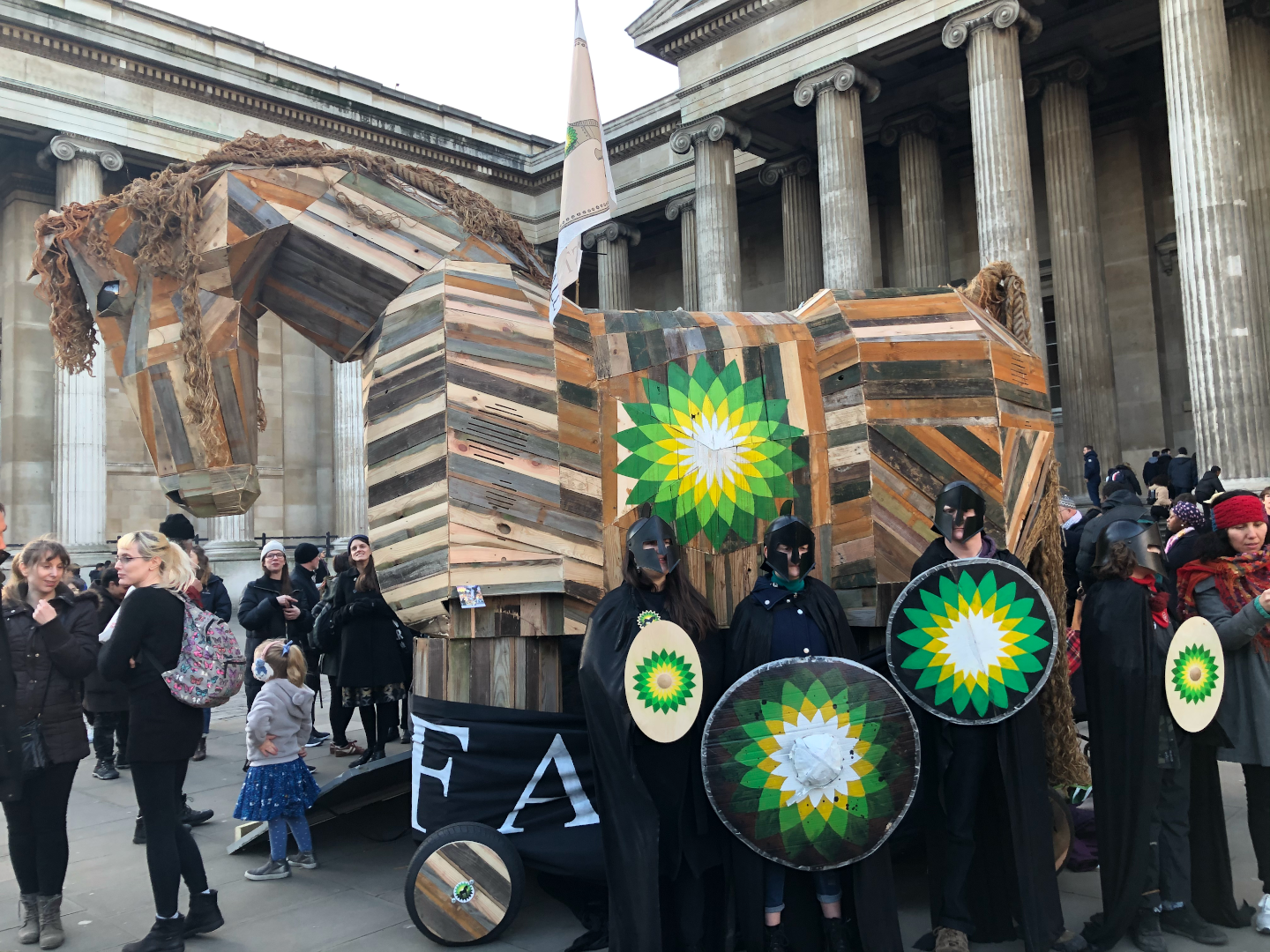 Many major arts institutions dropped their oil company sponsors last year, proclaiming a “climate emergency”. As activists continue to picket museums, Patricia Clarke asks whether the art world can afford to lose some of its wealthiest donors.

On a crisp morning in February, it is impossible to miss the colonnade-clad courtyard of the British Museum. Beneath billowing banners that advertise its new exhibition, Troy: Myth and Reality, a 13-foot Trojan Horse sits squarely in the centre, surrounded by shield-clad soldiers and a troupe of Greek gods whose bodies are painted silver.

A befuddled visitor might think this part of the exhibition, but it doesn’t take much to spot BP’s green-and-yellow logo on the side of the horse, or the host of banners declaring ‘BP MUST FALL’. Troy: Myth and Reality is supported by the oil giant, and an estimated 1,500 campaigners are gathered here to protest its sponsorship of the British Museum.

“There’s a real irony to it, because the exhibition is really a Trojan horse for BP,” says Danny Chivers of BP or Not BP, the activist group in charge of organising the protest. “They are pretending it’s a generous gift to the museum, but actually it’s just a façade so they can carry on with their real destructive activities.”

Through a series of theatre performances, installations and peaceful gatherings – what Chivers calls “creative disobedience” – BP or Not BP aim “to take action against BP, colonialism and the climate crisis”.

By “destructive activities”, Chivers is referring to the contribution of fossil fuels to the climate crisis and, in particular, to the company’s poor image when it comes to climate change.

BP has struggled to clean up its reputation ever since the Deepwater Horizon oil spill in 2010, which saw 11 workers killed on the Gulf of Mexico and had a devastating effect on marine life.

With a global rise in climate awareness, the oil giant has come under further scrutiny for its use of fossil fuels and, more recently, it has been criticised for failing to comply with the terms of the Paris Agreement.

A spokesperson for the British Museum said they allow for peaceful protest on site, and share the activists’ concerns for the challenges related to the climate crisis. “We look to make a contribution, through reductions in our energy consumption and addressing the issues of climate change in the museum, through exhibitions and public programming.

“As such we feel it is very important that we maintain our offer for the public and we cannot do this without sponsorship.”

BP refused to comment on its sponsorship deal with the British Museum, but a statement on their website says they fund the arts to help build a “more inspired and creative society”. They also appear to acknowledge the climate protests: “We know that our funding of the arts is in the spotlight.

“We understand the points of view being put forward, and we believe that climate solutions will be reached more quickly through dialogue and engagement.”

Art and oil: a historic partnership

BP, of course, is not the only oil company involved in arts sponsorship, nor is the British Museum the only cultural institution on the receiving end of funding from big oil. The history of art and oil goes back decades, from Tate’s 26-year sponsorship with BP, to Shell’s 12-year partnership with the National Gallery.

Like BP, most oil companies say sponsorships are a gesture of goodwill – they are just well-off donors giving back to the public. A statement on Shell’s website reads: “It is part of our integral values to invest in the general wellbeing of the community.”

But some experts are cynical about big oil’s role in art sponsorships. Mel Evans, author of Artwash: Big Oil and the Arts, says that, during the global surge in climate politics, a company like BP “needs to repair its social contract” with the public. In other words, an oil company’s sponsorship of the arts could be considered “greenwashing”, a convenient PR move that detracts from its role in the climate crisis.

But is it time for these historic partnerships to come to an end? Chivers certainly thinks so. The activist says museums have a responsibility to scrutinise their sources of income: “As publicly funded cultural institutions, they should be working in the interests of the public and ask themselves, ‘Who are they for? In whose interest are they acting?’ Because the oil companies are actively working against the interests of humanity.” 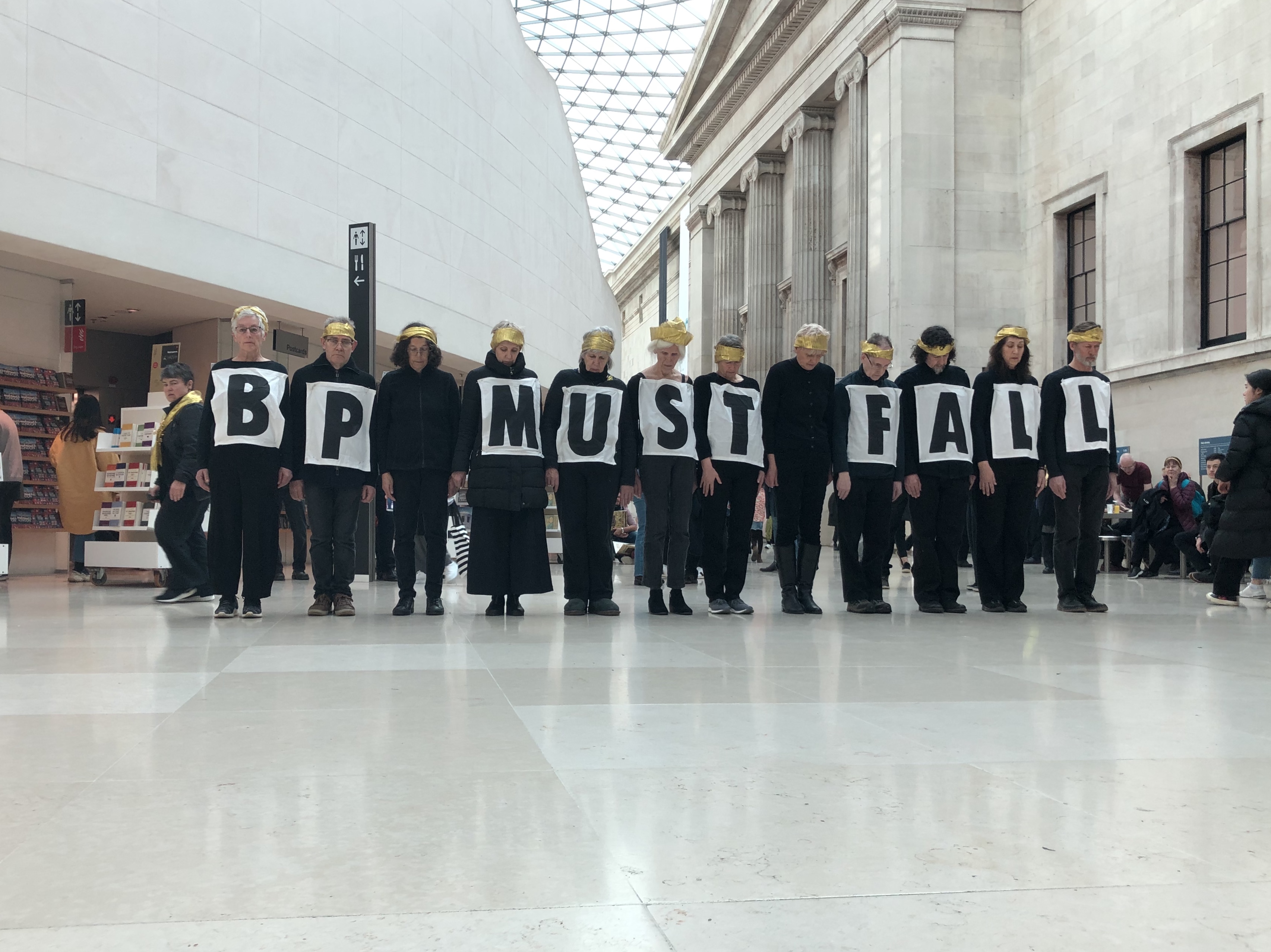 Corporate social responsibility expert Carlos Sentís agrees that oil giants are responsible for greenwashing, but he does not necessarily think museums should cut their ties with big oil. “I don’t think it is advisable or realistic to expect [cultural institutions] to refuse these donations,” he says. “We cannot forget that the world we live in is still dependent on oil to function.”

While we cannot expect oil companies to simply disappear, particularly when we use the energy they generate on a daily basis, Sentís says the activists “can encourage [oil giants] to innovate and implement policies that are going to generate a larger positive effect in the world, without harming their business”.

Oil companies have power, and with that power comes the ability to generate change. Sentís, who is also founder of the World Impact Alliance, argues that activists should be encouraging oil companies to implement more sustainable policies, rather than boycotting them: “The private sector is not the enemy; it is part of the solution.”

And yet there is mounting pressure on arts institutions in the UK to move away from oil money. November 2019 alone saw a wave of cultural centres speaking out against big oil, the most publicised of what was that of the Royal Shakespeare Company, which broke its contract with BP after the resignation of Mark Rylance in July 2019.

In a statement, the theatre said: “young people are now saying clearly to us that the BP sponsorship is putting a barrier between them and their wish to engage with the RSC.” Other cultural institutions followed, including the National Galleries of Scotland, who severed their ties with BP over the “climate emergency”.

Meanwhile, oil giant Shell quietly ended its 12-year sponsorship of the National Gallery, following months of protests at the museum. A spokesperson said the decision would allow Shell to “focus on our work to inspire the next generation of engineers through our Stem (science, technology, engineering and maths) education programmes”. Perhaps it was also a response to mounting pressure from activists.

Ed Collin, head of corporate lobbying at InfluenceMap, a think tank, compares the recent move away from oil to the late 1990s, when cultural institutions began to boycott funding from tobacco companies. Collin says: “Big oil is trying to avoid the removal of the tacit consent of the public, for it to continue making money as people become more and more aware of the damaging effects of its chief products.” 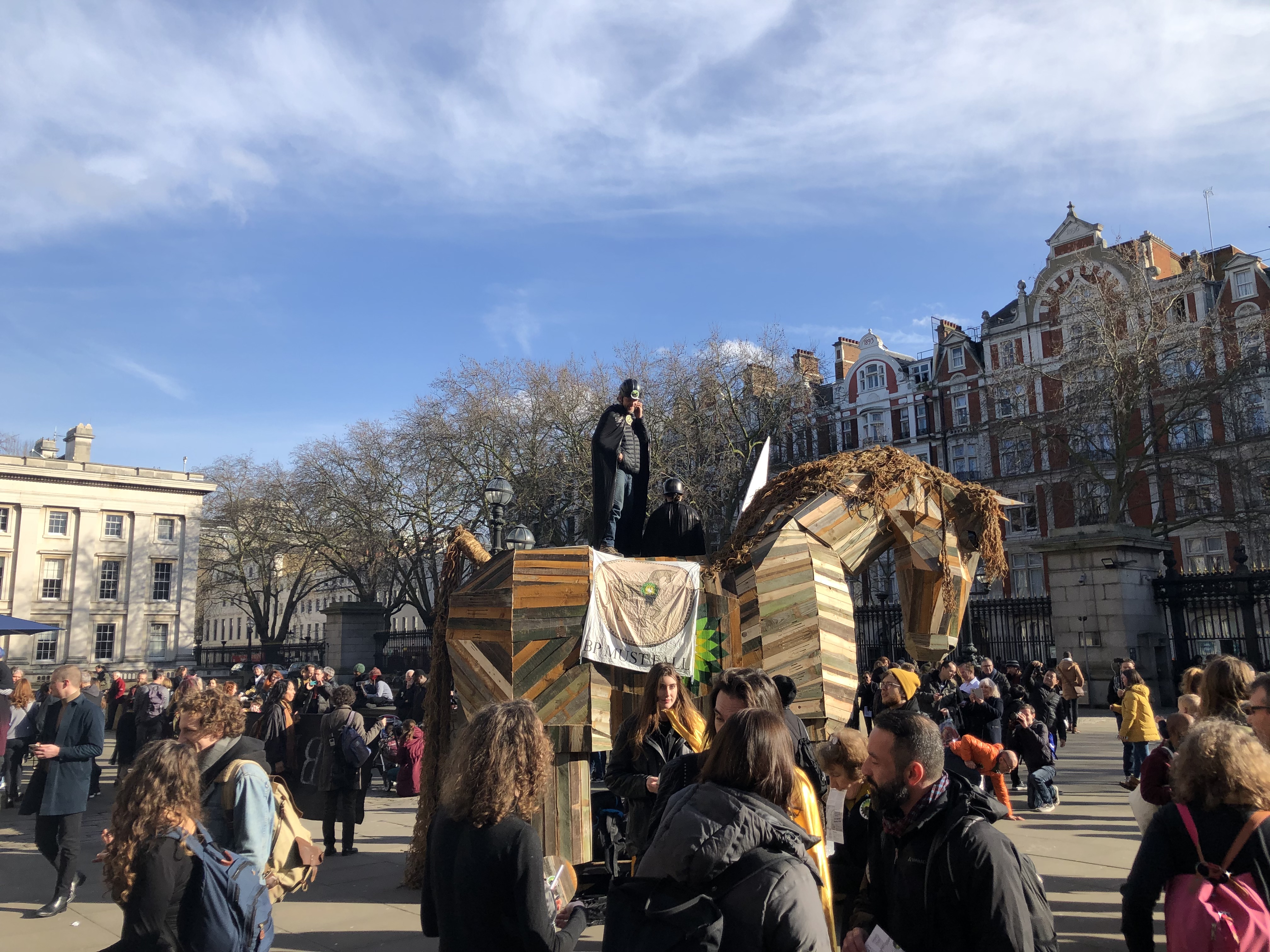 Protestors surround a 13ft Trojan Horse, produced by BP or Not BP

Others argue that groundbreaking, accessible art would not be possible without oil companies. A spokesperson for the British Museum said: “Without external support much programming and other major projects would not happen. The British Museum is grateful to all those who support its work in times of reduced funding.”

Government funding of the arts dropped by 13 per cent between 2007 and 2017, meaning cultural institutions are being forced to seek alternative sources of funding. BP is due to donate £7.5m to arts organisations in the UK between 2018 and 2023.

“The government cuts are serious and we don’t wish to diminish that, but it’s a myth that oil giants fund a great deal of art,” says Chivers. Though the exact figures of the British Museum sponsorship have not been released publicly, activists estimate that they account for one per cent of the institution’s funding.

Chivers suggests museums should “start thinking critically about their own values, and how their sponsorships can mirror them”. Evans echoes this, pointing to the Code of Ethics set out by the Museums Association, who say cultural institutions should “seek support from organisations whose ethical values are consistent with those of the museum.”

Policy manager at the Museums Association, Alistair Brown, gives the example of the Natural History Museum, who partnered with Danish wind company Orsted for their blockbuster Wildlife Photographer of the Year exhibition. “That’s really heartening because that wasn’t happening 10 years ago. As a sector, we should be making more of that kind of thing.”

So is it the end of art and big oil? Following Saturday’s protest – the biggest demonstration ever held at the British Museum – BP pledged to cut emissions to zero by 2050. It is the first oil company to set a date for this ambitious target. Perhaps it is anxious to avoid the fate of Troy.