Twitter temporary closed its London headquarter as over 1000 employees worldwide quitting and sparking the #RIPTwitter trend on Twitter.

A message was sent out to Twitter staff, informing them the office would be closed and was expected to reopen on Monday, but any sign of the company in the Piccadilly Circus building has been reported to have disappeared.

The message followed the new long-hour policy made by Musk, which over 1000 employees have refused to comply and resigned.

There has not been any update on the reopening of London office, but Twitter HQ at San Francisco, among many offices closed, has reopened yesterday.

Musk has so far fired over 7500 employees worldwide, including workers from top management, and last Thursday was the deadline for employees to accept the demand of “long hours at high intensity” or leave the company with months of severance pay, according to LBC’s report.

Following a series of actions against Twitter employees, the hashtag #RIPTwitter started trending on the platform, with memes mocking Musk’s decisions and the unstable situation of the company.

In response to the trend, Elon Musk tweeted: “Twitter is ALIVE”, following his decisions to reinstate several accounts previously banned on Twitter, including former President Trump.

The people have spoken.

Trump will be reinstated.

This tweet, however, seemed to have also stoke fire as the number of posts with #RIPTwitter reached a small peak after Musk’s tweet. 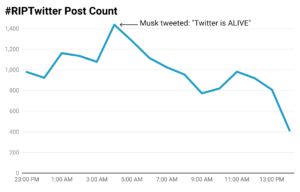 According to BBC, former employees have predicted more will leave the company either willingly or being terminated and have said this resulted in “nobody left in that chain of command.”

Prospect, the union representing former Twitter employees, wrote a letter to Twitter’s HR and said in one tweet: “Big tech barons are not above the law.”

The letter asked Twitter to provide redundancy consultation, specify how many more employee layoffs and over what timescale, and how company plans to fulfill its legal obligations for a redundancy of such scale.

Prospect General Secretary Mike Clancy said: “From removal of remote working, demanding commitment to long hours and unsustainable working practices, and now locking employees out of their offices, we will not let these makings of a digital P&O pass unchecked.”

The massive layoff also caused other problems, among which was the reimbursement of unpaid expenses, according to Fortune. Many employees in the UK now have troubles receiving expenses they put in prior to Musk’s takeover, and according to the report, some were even owed up to £8000.

Twitter has been in the centre of controversies since it was bought by the founder of Tesla and SpaceX, Elon Musk, who has announced to put a monthly fee of $8 dollars (£6.73) on its blue tick mark, which has been met with backlashes that suspected the new policy would invite more bad actors and exploitation.